Description: Looking for an affordable apartment in the prefect location doesn’t come cheap. Today, Jake Jace is looking for open house visits to see. He needs a place but Olivia Austin’s prices are still a bit steep for him, it certainly comes with some small-print cost. As she gives the tour to her potential sub letter, she notices his athletic body, taking a particular sight of his bulge wondering what big cock is hidden by his shorts! He takes note of a strange bed-like structure with a wooden bowl filled with some sort of clear substance. She apologizes, saying she didn’t have time to clean up her work space before he came. Intrigued with what he sees on the floor, he keeps asking questions, wondering more about what she does. She smirks, excited to show this handsome young ginger her big tits and her tight pussy. The Nuru Massage is her massage specialty, and she offers him a free sample to maybe change his mind. It’s a tantalizing offer that even a stranger couldn’t say no to. And maybe, after a good rub down with Olivia’s big firm tits and warm, inviting pussy, he might reconsider the flat after all! When she finally takes his cock in her hands she assures him it’s all part of the massage. Then she tastes his cock, and commits to a mouth massage that he was never expecting. things keep getting hotter when she lets him fuck her slimy big tits and finally rides his cock like there’s no tomorrow! 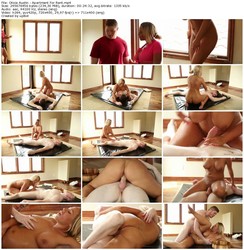 Description: Boy Oh Boy, Robby Echo is in quite the pickle! Unsure if he’s doing the right thing, Robby paces back and forth in front of the Nuru Massage door, in complete disarray. Robby, a geeky virgin thinks the best way to lose his virginity is to meet a masseuse here that are known for offering a little extra, specifically, cock release. Sarah Jessie welcomes Robby into the establishment and onto the couch. Robby comes out with the whole truth that He’s never been with a girl, nor has he ever touched one. Sarah emphasizes with him, promising she will take exceptional care of him today. The whole situation is too much for Robby’s body to handle; having Sarah touching his leg causes Robby to pre-ejaculate, exposing a wet sport over his pants. This didn’t stop Robby from continuing his dream of fucking a hot chick. She undresses herself, displaying her enormous boobs and pierced pussy. The scenario is very exciting for Robby, afraid he will cum again and ruin his whole plan. They make their way into the shower, but Robby is adamant to keep his underwear on, still shy since this is his first time ever being with a woman. But Sarah was a professional, determined to get her hands on his virgin cock.