Description: The story concerns one Yu Yuan-gi (Patricia Ha), a young lady renowned for her scholarship who has chosen to become a Taoist priestess in order to keep her independence and avoid becoming just another wife or mistress to a minor official. She’s a very strong character as the film begins, aware of what she wants out of life and secure in her position as a famous scholar. Life in a monastic order doesn’t really fit with Yu’s insatiable taste for liasons and the world outside her place in society, however; while she associates with the upper classes in her role of the celebrated poetess, she spends her time in the arms of a rough-hewn wandering swordsman (Alex Man Chi-Leung). She also carries on a relationship with her maid, Lu Chiao (Lin Kai-lin), something that’s seen as even more scandalous by her order and the world at large. As the film progresses, Yu Yuan-gi makes even more amoral decisions, and her world begins to spin out of control. 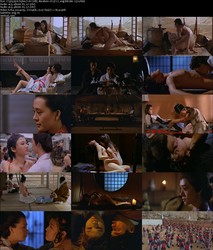